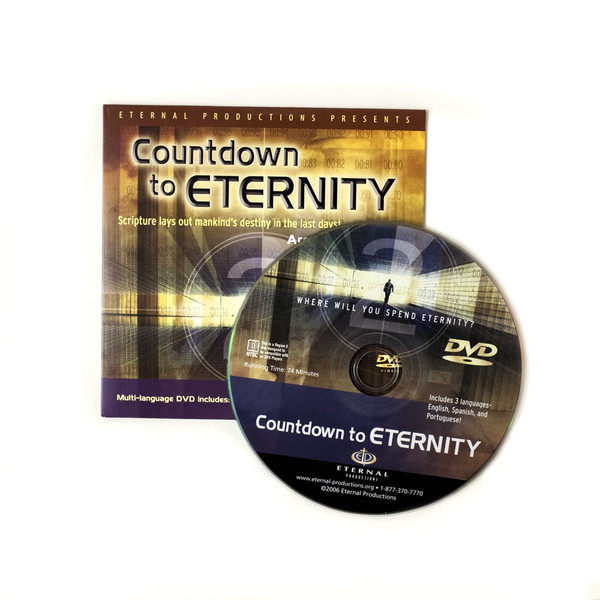 The Bible Lays Out Mankind's Destiny in the Last Days!
The Classic Bible Prophecy Documentary
Are Your Prepared?
Now Available On DVD!

Are you searching for absolute truth? Through prophecy, the Bible authenticates that it alone transcends time and space. No other book dares to establish its credibility by telling the future in advance. A look at the "signs of the times" with Dave Hunt, Chuck Missler, Roger Oakland, and Chuck Smith.

What is this world coming to? Is there hope?

Hundreds of fulfilled prophecies prove that God has spoken to mankind, and we can know Him - the Creator, Lord and Savior!

This DVD examines several last days' prophecies being fulfilled before our very eyes. Since 1997, when this film was made, the players have changed, however these prophecies have come into even clearer focus.

"Everyone needs to see this DVD. No matter if you are a Christian or not. I just saw it and it shows you all of the prophecies that have come to pass out of the Bible. It was made in 1997. The world was bad back then, and seeing it now just confirms that just as fast as technology has made tremendous increase, evil in the world has done the same thing. They are predicting that a nuclear exchange would take place in the middle east, we are now closer to that than ever. The only book that predicts what the future holds with 100% accuracy is the Bible, Countdown to Eternity shows this beyond a shadow of a doubt."
(J. T. - TX)

"This is an excellent documentary which shows were our world is headed, and how world events today relate to the Bible. The speakers are Bill Gallatin, Dave Hunt, Chuck Missler, Roger Oakland and Chuck Smith. All of them do a great job of presenting the facts in this documentary, as they talk about several last days prophecies which are being fulfilled before our very eyes."
(J. L. - MN)

"The Countdown to Eternity DVD gave me a very clear understanding of the signs of the times. Looking at ancient Bible prophecies, these experts explain in no uncertain terms how the events we watch on our daily news are the signs that would precede Jesus' second coming."
(M. A. - CO)

"This DVD is great because it actually quotes bible verses for every "sign" of the last days that it talks about. As a Christian, it made me feel excited for the return of my Lord Jesus Christ! I highly recommend this DVD."
(A. R. - CA)

"I watched this on TV last night and it was interesting and thought-provoking. Anyone who thinks the Holy Bible is not a book of prophecy should see this. It's very well done and the scriptures that accompany the commentary should cause anyone to seriously consider the truthfulness of what is stated in Countdown to Eternity. It was made in 1997, so it's very old, but all you have to do is watch the news to see how accurate it is now, even from so long ago. I was thinking I'd like to see an update, but I don't know that one is needed. The Bible does not change, and what it foretells will not change. I was just at a church meeting the morning before seeing this, and we were discussing what we should study next in our group. Several people wanted to begin a study on the end times, and specifically mentioned the book of Daniel -- which is quoted often in this movie. I think this movie will be part of our study. Buy it, rent it, or borrow it -- but be sure to watch it." (M. M. - AZ)
×