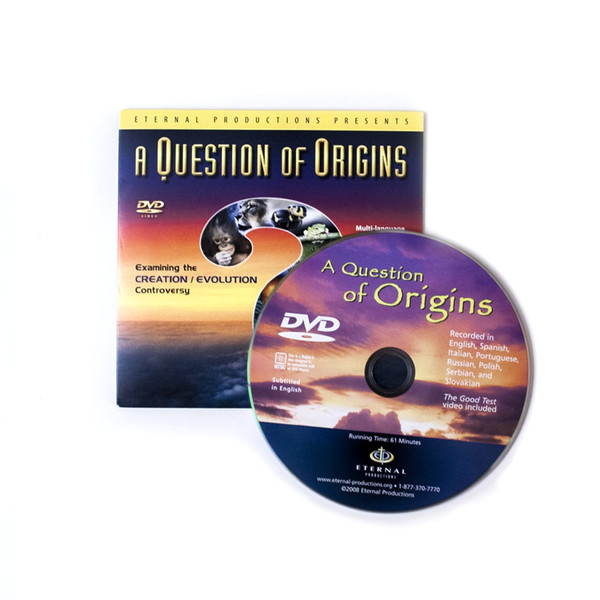 A Question of Origins!
Creation or Evolution?
Examining the Controversy

During the past century, much of the world has accepted the theory of evolution as fact. Yet recent discoveries from nearly every field of science dispute the molecules-to-man theory.

A Question of Origins takes an inspiring journey through science and Scripture in search of mankind's genesis. The theory of evolution has been applied to most scientific fields and this DVD thoroughly investigates the latest discoveries in:

Does the observable evidence support evolution? Or has the evolutionary bias blinded many to the overwhelming data that points to an awesome Creator?

Understanding mankind's true origin is essential in determining one's final destiny. This visually rich, full production presents conclusive evidence that the universe and all life were created. In addition, scientific foreknowledge found only in the Bible reveals that the God of the Bible is the Creator.

A Question of Origins is essential viewing for anyone who has questions or doubts concerning the scientific accuracy of the Word of God. A great witnessing tool intended for our current generation.

Also included on this DVD: The Good Test - a convicting and powerful Gospel presentation.

"This video presents evidence for the supernatural origins of life, the universe, and earth, and attributes the creation to the God of the Bible. This program points out that evolutionary science and theory is not the certain fact that many present it as. There are serious flaws and issues with the theory of evolution, and this video brings these to light. Offering a logical alternative to evolutionary theory, this video then seeks to show how the Genesis account of creation by God makes more logical sense than random evolution. Specific topics in Biology, Chemistry, and Cosmology are presented to show that Creationism by God is more likely than evolution. This DVD is a well-produced, visually rich presentation that favors the Creationism point of view. I invite the intellectually curious to explore both sides of the issue and come to an informed decision as possible."
(J. K. - MN)

"This is the best DVD on the Evolution/Creation debate I have seen. In just 60 minutes, it does a great job of explaining the two theories side by side and then point to the observable evidence. Which one is most logical, reasonable and fits what is actually true in nature and science? It is very up-to-date, clear and interesting."
(J. T. - TX)

"I liked this DVD a lot. Very interesting and especially challenging material for those people who still believe in school-taught "ape-man" ancestry. God is so magnificent and great! Watch this DVD and you will understand that mankind was created and has a purpose. Also, liked the multi-language feature and bonus material on Good News gospel presentation. I suggest it for non-believers and believers alike."
(H. B. - DE)

"Definitely two thumbs up. This DVD is a must-see, especially for young adults who are still trying to understand their purpose in life. The information given is so simple to grasp that only those with dark and hardened hearts miss God's message about His grandeur. P.S. Who made the ingredients for the 'big bang?'"
(J. M. - MO)
×