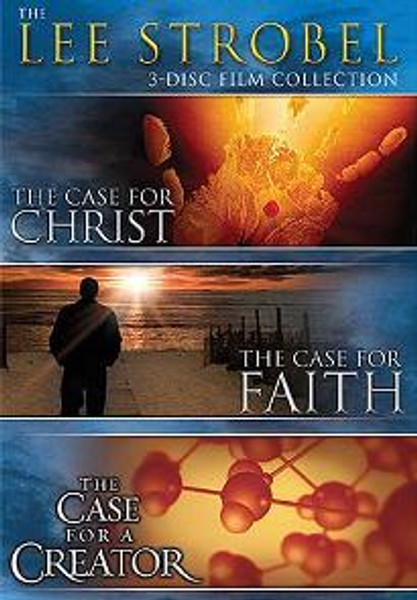 These life-changing DVDs will affect your look at the world and your faith in God.

Based on the New York Times best-selling and Gold Medallion winning books that have sold over eight million copies.

The Case For Christ: Retracing his own spiritual journey, Lee Strobel, award-winning former legal editor of The Chicago Tribune, cross-examines the religious experts from Cambridge, Princeton, and other universities with tough, point-blank questions. This remarkable documentary is a riveting quest for the truth about history's most compelling figure.

The Case For Faith: Despite the compelling historical evidence, many people grapple with serious concerns about faith in God. Strobel turns his tenacious investigative skills to the most persistent emotional objections to belief - the eight "heart" barriers to faith. The Case for Faith is for those who may be feeling attracted to Jesus but who are faced with intellectual barriers standing squarely in their path.

The Case For a Creator: When objectively considered, does contemporary scientific evidence point toward or away from a supernatural Creator? Using interviews with scientists and scholars from a wide range of disciplines for the answers, The Case For a Creator is a remarkable film about Strobel's journey from spiritual skepticism to a profound faith in the God who has etched His indelible signature upon each galaxy and every living cell.

"A Christian learns even more reasons to believe! I'll try not to be long-winded with this review. In short, it was fantastic! My only complaint? That it wasn't 4 hours long! Seriously! It was so interesting I didn't want it to end. I'm a lifelong Christian, and since I've become a mother, I've spent even more time studying scripture and considering spiritual matters so that I can best guide my son to serve God. This DVD taught me things I didn't know! I love learning new, historically relevant facts about the Bible and the world as it was in Biblical times. Hearing all of the collaborating evidence as it related to the life, teachings, crucifixion and resurrection of Jesus Christ strengthened my own faith even further! Thank you, Lee Strobel, for telling your story! You've done a great job on this."
(S. W. - NC)

"I wish more people would watch it! The Case for a Creator was easy to follow. Chronologically flowed well and statements and theories were well substantiated and well documented."
(C. P. - Vancouver, WA)

Prophecies of the Passion VOD

Living Waters: Intelligent Design in the Oceans of the Earth Blu-ray