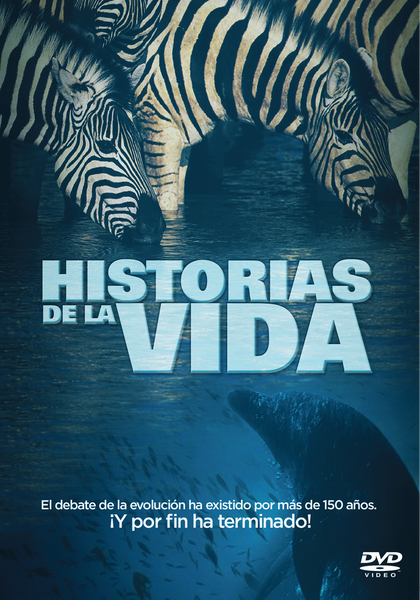 Why Do Species Depend On One Another?
Where Does Instinct and Intelligence Come From?
Discover the Answers in Life's Story 1 & 2 Spanish!

Life's Story 1 & 2 documents some of the natural wonders of the animal world, from marine life, to birds, to apes and humans. Weaving a vast tapestry of life, these two (2) outstanding DVDs contain plenty of fact-based narration that will help viewers of all ages appreciate the variety and wonder of the animal kingdom ..

A factual and visual feast from beginning to end. It takes you on an incredible documentary journey of discovery to unravel some of the most amazing mysteries of the natural world.

From simple cells in the seas to fish, amphibians, reptiles, birds, mammals and eventually humans; this we are told has been the evolutionary tree of life. So how does this theory fit in with all we see around us?

After thousands of years of observable evidence and advances in biological research, do Darwin 's evolutionary ideas measure-up to the discoveries of modern science today?

In these two programs you will learn about the navigation techniques and defense mechanisms of marine life, the complex behavior of birds, the differences between apes, monkeys and humans, "ape-men" mixing link hoaxes, and how some of the large mammals feed and digest their food.

From Egypt and the depths of the Red Sea to the Islands of Malta, the Cape of Good Hope and the Savannahs of South Africa, now you can see for yourself and understand the intricate designs of natures vast array of creatures and our place among them in this wonderfully created world.

Many unusual, rare and endangered species are featured in this program including animal behavior never filmed before.

Suitable for use in schools. 10yrs - Adult