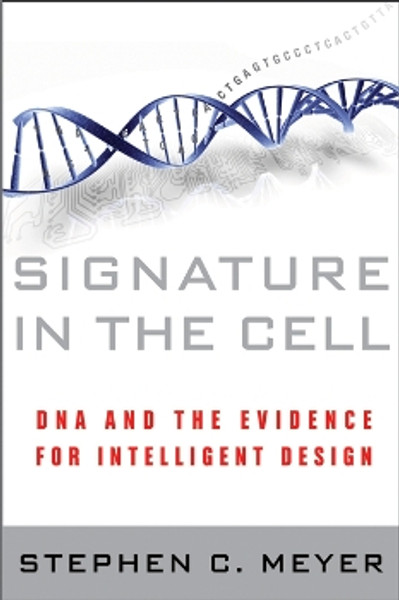 Named Book Of The Year By Times Literary Supplement

Signature in the Cell
DNA and the Evidence for Intelligent Design NOW IN PAPERBACK!

One hundred fifty years ago, Charles Darwin revolutionized biology, but did he refute intelligent design (ID)? In Signature in the Cell, Stephen Meyer argues that he did not.

Much confusion surrounds the theory of intelligent design. Frequently misrepresented by the media, politicians, and local school boards, intelligent design can be defended on purely scientific grounds in accordance with the same rigorous methods that apply to every proposed origin-of-life theory.

Signature in the Cell is the first book to make a comprehensive case for intelligent design based upon DNA. Meyer embarks on an odyssey of discovery as he investigates current evolutionary theories and the evidence that ultimately led him to affirm intelligent design. Clearly defining what ID is and is not, Meyer shows that the argument for intelligent design is not based on ignorance or "giving up on science," but instead upon our growing scientific knowledge of the information stored in the cell.

A leading proponent of intelligent design in the scientific community, Meyer presents a compelling case that will generate heated debate, command attention, and find new adherents from leading scientists around the world.

"The Crumbling of a Theory. In my opinion this book is the most important volume on the strength of the intelligent design arguments and the weaknesses of the currently dominant "theory" that has been written to date. Dr. Meyer's investment in time over a number of years in its preparation, as evidenced by its 33 page bibliography, will reap great rewards through the clarity and easy to understand descriptions for the layman of the arguments and evidence for both sides, as well as the graciousness he demonstrates in addressing the treatment ID proponents have received from the other side."
(R. A. - VA)

"A Significant Contribution. Meyer has made a significant contribution to two of the great unsolved mysteries in science: the origin of life and the evolution of life forms. He uses probability theory and information theory as powerful, scientific tools to explain the inadequacy of Darwinian theory and to present a compelling case for intelligent design. The book also provides a thorough analysis of the history of evolution theories and the advances in biology since Darwin's time. It is a thorough review of the issues related to life's origin and evolution and a detailed response to critics of ID. Meyer emphasizes the science involved, not religious aspects. He makes a strong case for the scientific validity of ID, and states that "The theory of intelligent design does not claim to detect a supernatural intelligence possessing unlimited powers."
(C. P. - LA)

"A fantastic book that clearly answers expressed objections to ID as science. It presents arguments in a very readable form, in a journey that considers the known speculative scenarios from chance to necessity (law, biological predestination, self-organization, etc.) for the origin of the information in life The biological details and complexities are presented in a manner that can be followed and appreciated by most people. Meyer builds the case that ID is real science, based on empirical evidence and established scientific principles (and supported by peer-reviewed literature). He also makes predictions of findings that would support ID."
(D. J. - NC)

"First, I must say that I was a product of my government education that could only teach that the complex organisms we see around us are the fruit of natural processes given enough time to produce what we observe today. For many years I was comfortable with the Darwinian paradigm and yet what I found was unnecessary complexity, symmetry and non-functional beauty in the world that was not explainable through the prevailing scientific model. This means that modern scientists must deny what they actually see and exchange these truths for implausible explanations so that they can protect their model. It is no wonder that many of the scientists who have reviewed the book are slamming the science because the concept of a designer cannot be accommodated by the current scientific model. This isn't a problem with science; it is, at its core, a problem of honesty. And as the movie Expelled revealed, ID presents a genuine threat in the academic world because it would jeopardize grants, cause retractions and add a branch to the science department that it knows nothing about - something outside of nature - something supernatural. Dr. Meyer demonstrates that he is no scientist wanna-be. His thorough research and analysis are only matched by his sound reasoning and, although there are profound implications to his conclusions, he has been honest enough to say that which has heretofore been covered over with gibberish. Dr. Meyer proves that he has the capital to go thought-by-thought with modern academia and does so with humility and clarity. This is an excellent read and I would highly recommend it. Clearly, as evidenced by all those who are taking shots at the book, the time was perfect for a work of this caliber."
(B. B. - WA)

"This book is, without doubt, the best positive (as opposed to polemic) argument I've yet read for intelligent design as a legitimate scientific theory of the origin of life. Dr. Meyer's approach is to begin with the epistemological principles that historical scientists (such as geologists, paleontologists, cosmologists, and evolutionary biologists) use to evaluate the strength of scientific theories of past events, and to apply those principles to evaluate the common explanations for the origin of life, including intelligent design. To be more precise, he evaluates the various explanations of how the mechanism of gene expression and protein manufacture arose in such a way that it seems to be already almost fully developed in even the simplest prokaryotes. In the process of doing this, he presents a very convincing argument that, according to these very well-established scientific epistemological principles, the theory of an intelligent designer is at least as good a theory of the origin of life as other theories currently being propounded. It will be interesting to see how the rabidly anti-ID folks respond to his book. His argument is very difficult to dismiss, unless one adds an additional a priori postulate to the rules of evaluation for scientific theories, viz., that no theory involving an intelligent designer can be an acceptable theory. But the adoption of this postulate as a criterion for acceptable scientific theories certainly seems more emotionally than logically motivated. Said another way, this book will make it very difficult for those who claim to be unbiased, disinterested truth-seekers to hold a dogmatically anti-ID view in that they would have to rule out anti-ID theories a priori, as opposed to based on evidence. Highly recommended!"
(T. G. - CA)

The Sovereignty of God by A.W. Pink Paperback Book