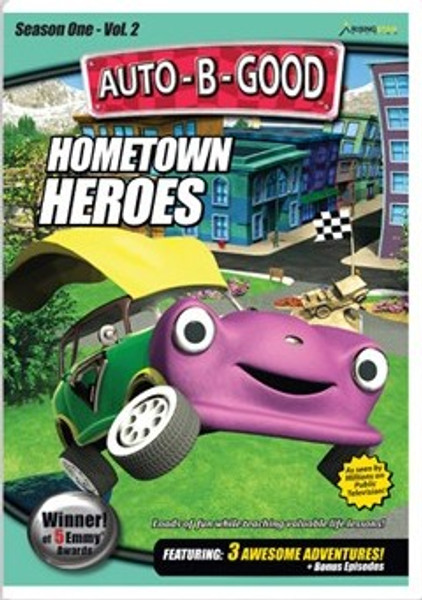 Auto-B-Good Special Edition: Hometown Heroes - The younger cars learn the importance of citizenship and loyalty as Franklin tells the story of CJ Willy and the sacrifice he made for his fellow soldiers. Also included are lessons on politeness, independence and patriotism.
This video will drive home the message of character with award winning animation and fun!

Episode 2 - The Price of Freedom (Citizenship)
After piquing the curiosity of the younger cars, Franklin finally shares the story of his friend CJ Willy and the Big War... and what it means to be a citizen.

Episode 3 - No Greater Love (Loyalty)
Franklin continues telling the heroic saga of CJ Willy's bravery and the sacrifice he made to save his fellow soldiers.

Bonus episode - Izzi and the Giant
The future home of the Super Mall prompts EJ and company to make a last stand. But are there other ways to defend the land they love and save their precious soccer field?

"Our family really enjoys the Auto B Good DVDs. We have Episodes 1, 2 and 3… we will be purchasing the entire set! Our thanks to the producers of this amazing children's series!"
(G. G. - Nashville, TN)"