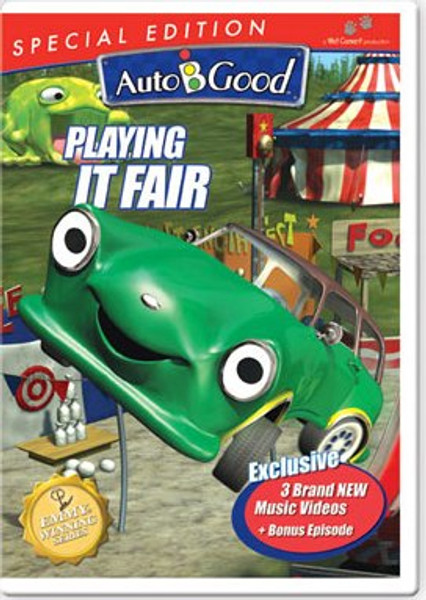 Auto-B-Good Special Edition: Playing It Fair - EJ has discovered a monster lurking outside the City of Auto, but cannot convince his friends - except for Izzi, who believes in her friend no matter what. Children will learn about trustworthiness, helpfulness and enthusiasm. With each episode being wrapped up with a music video, this video is full of fun and Bible-centered values!

Episode 1 - Monster Trap (Trustworthiness)
EJ has discovered a monster lurking outside the City of Auto, but everyone thinks EJ is off his axle except for Izzi, who is willing to believe her friend.
Music video: True Friend

Episode 2 - CARnival (Helpfulness)
The whole crew is needed to set up an old-fashioned carnival, but EJ is goofing off. It's a good thing his friends are around to teach EJ the value of being helpful.
Music video: A Helping Hand

Episode 3 - Lug Nutt (Enthusiasm)
When the old vaudeville team of Lug Nutt & Dipstick comes to town, Miles learns how enthusiasm leads to success... or is that the other way around?
Music video: All About Your Attitude

Bonus episode - The Secret Force (Initiative)
The state of Good is having a "Model Car of the Year" competition. To make sure it is fair, the scores will be tabulated by Professor's new invention. A surprise winner!