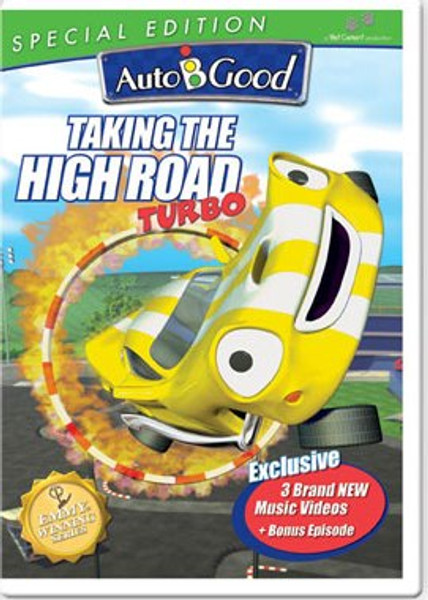 Auto-B-Good Special Edition: Taking The High Road Turbo - It's race time! Join Johnny while he races against the best in the world as the City of Auto celebrates the opening of the new Morales Highway. Will the other cars cheat to win or will Johnny prove victorious? Children will learn about goodness, dignity and integrity. With a bonus episode that teaches courtesy and 3 brand-new music videos wrapping up each episode, this video is full of fun and packed with life changing values!

Episode 1 - Cheaters U-Turn (Goodness)
It's race time! To celebrate the opening of the new Morales Highway, the City of Auto has organized a grand race with the best racers from around the world. It looks like an easy victory for our sports car Johnny! That is, if the other racers were not cheating.
Music video: Do the Right Thing

Episode 2 - The Cobra Canyon Leap (Dignity)
The legendary show car Diesel Kanevil comes to town for his final jump - the leap across Cobra Canyon! However... to all the other cars Diesel appears too old and past his prime. Johnny feels it's up to him to step in and boldly attempt to save his hero's dignity.
Music video: Straight Ahead

Episode 3 - The Integrity Project (Integrity)
The Professor's house is filled with amazing inventions, gadgets and doodads. While visiting the Professor, Izzi and EJ find one that is hidden among his many other wonderful inventions that doesn't work at all. What makes this "failure" his most successful contraption ever?
Music video: Use Your Integrity

Bonus episode - Too Rough Around the Edges (Courtesy)
Franklin doesn't believe Elrod can change his coarse ways and move back to the city. Could a little courtesy change Franklin's mind?

"Our family really enjoys the Auto B Good DVDs. We have Episodes 1, 2 and 3… we will be purchasing the entire set! Our thanks to the producers of this amazing children's series!"
(G. G. - Nashville, TN)