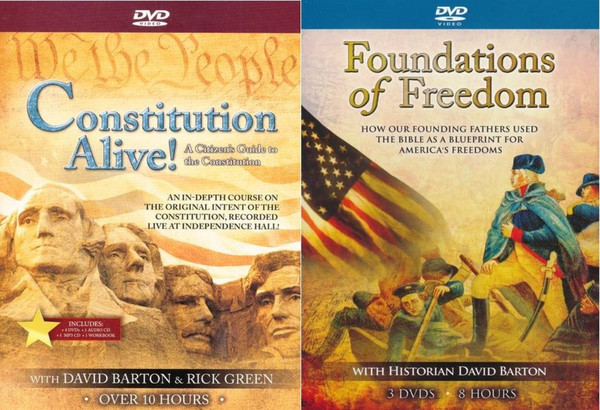 Join Christian historian David Barton and former Texas legislator Rick Green as they advocate for the original intent of our founding documents in this one-of-a-kind, 4-DVD set on the meaning and purpose of the Constitution. Go article by article through the Constitution and the Bill of Rights, and learn more about executive orders, the Electoral College, the powers of Congress and the President, freedom of religion, and more. Shot on location at Independence Hall in Philadelphia, Constitution Alive is a truly unique opportunity to regain an intimate knowledge of the Constitution every American citizen should have.

The Dove Foundation Review:
Constitution Alive is a wonderful four-DVD set that brings the Declaration of Independence, the Constitution, and a world of information to life. Each DVD focuses on a different aspect of the Constitution, on which Barton and Green elaborate. Watching this video series is just like taking a course on these important topics.

This series is very educational and well presented. Teachers could utilize it as a classroom tool or an entire course on the Constitution of the United States.

Every American should watch this series.

Disc 2: Congress, the articles, and the presidents and expounds on the differences between limited government and small government, jurisdiction lines, and the topic of marriage

How Our Founders Used the Bible As a Blueprint for America's Freedoms
Foundations of Freedom!
with Historian David Barton

America stands at the crossroads of human history. Once revered and respected throughout the world, the country’s influence and freedoms are in jeopardy, but what if America’s story is more bold, colorful, and compelling than you ever imagined? If ever there were a time to rediscover the vision, passion, and wisdom of those who laid the foundations of our nation, it is now!

Join historian David Barton with special guests Glenn Beck, Rick Green, Dr. Carol M. Swain, and Congresswoman Michele Bachmann as they explore the America our Founding Fathers envisioned. From the formation of American law and the judicial system to biblically-based economics, science, government, and more, discover how our Founding Fathers used the Bible as a blueprint for America’s freedoms and build your faith in our nation’s future with Foundations of Freedom.