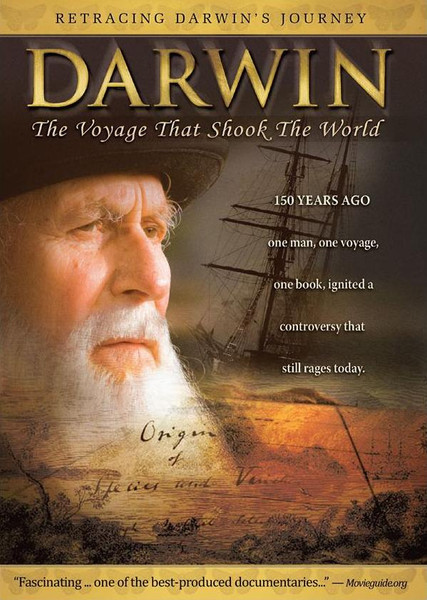 150 Years Ago... One Man...One Voyage... One Book...
Ignited a Controversy that Still Rages Today!
200th Anniversary Special Edition
Darwin:Voyage that Shook the World

In 1831 a young amateur scientist, Charles Darwin, boarded the HMS Beagle on an epic five-year voyage of discovery that would shake the world.

In this expansive documentary the HMS Beagle once again sets sail as it retraces Charles Darwin's voyage in lavish detail, examining his findings and remarkable conclusions and their implications in the light of modern knowledge.

Filmed in South America, United Kingdom, North America, Australia and Europe, Darwin: The Voyage That Shook The World features dramatic period recreations and stunning nature cinematography, all interwoven with scholars, scientists and Darwin experts who share differing perspectives on the man and the controversy he stirred.

Darwin Double Anniversary 2009 marked the 200th year since Darwin s birth and the 150th year since the publication of his book The Origin of Species.

"Fascinating and thought-provoking...one of the best produced documentaries ever made." - Movieguide.org

"A Must See Video! Darwin: The Voyage that Shook the World is a high quality production that takes the viewer back to the early 1800s. If you love history, and/or science, this video is for you regardless of your position on Darwin and the origins question. Interviews include with some of the top science historians today, including the leading Darwin historian, Janet Browne, now at Harvard. Includes interviews with those on both sides of the origins controversy. The producer bent over backward to be fair, and some feel he bent over too far, but the final product is ideal for classrooms and similar audiences. This video is a must see for all of those persons interested in the creation evolution controversy, a topic most people today have an interest in. The interviews alone are worth the price of the video."
(D. R. - London)

"Beautiful, Powerful and Provocative. Darwin; The Voyage that Shook the World is by far the most beautiful, powerful and provocative media production ever produced that encapsulates the essence of Darwin's contribution to the natural sciences."
(R. N. - CA)

"Wow! What a stunning production! Excellent from start to finish. Even my wife loved it, and she's always complaining about the low quality of most creationist videos. This one may as well have been produced by National Geographic...the film is literally that good!"
(J. S. - CA)

"Movie is very well made. I liked special features also (don't skip it). Good news for international viewers: DVD has subtitles in 18 different languages. I wish all material from CMI had it."
(V. V. - NY)