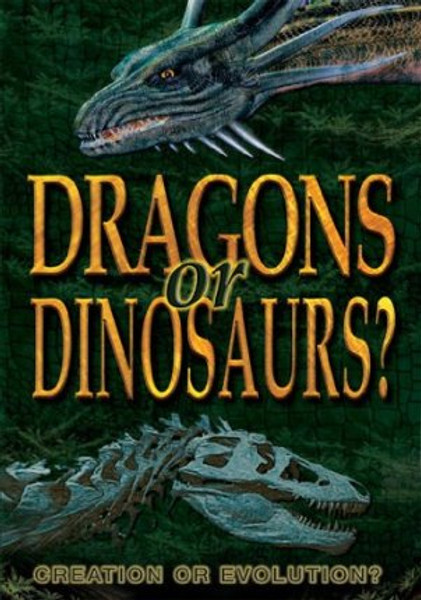 Creation or Evolution?
Dragons or Dinosaurs?
From the Producers of
Left Behind: The Movie

Creation of evolution? Dragon images, legends and lore exist all over the world in many different cultures. But what if dragons were actually dinosaurs?

Dinosaurs are often used to discredit the Bible, so what if their existence actually helps prove its veracity? DRAGONS OR DINOSAURS? answers these and other questions that surround this controversial theory.

"For those who are truly willing to open their minds to thoughts other than those taught as absolute fact by the established educational system, it will behoove you to take a look at this. You might not agree but certainly it gives "evolution" theory (taught as observable fact without the observation part!) a counter argument. If the educational system is supposed to teach people "how to think" rather than "what to think", then why be afraid to look at a different point of view."
(L. I. - WA)

"This film discusses the existence of dragons and dinosaurs. It discusses how folk lore shared various similarities across the globe, and how more importantly that the word dinosaur did not even come about until the mid 1800s. Therefore every description prior to this would have used dragon. They showed many different types and how like with much other folk lore once mixed together you get the flying fire breathing reptile looking creatures. They also use a lot of scripture to show how history lines up with the bible. bottom line is if you want to know more about dinosaurs this is the dvd to check out!"
(C. B. - OR)

"It is about the evidence that God created the world because of scientific facts and artifacts that were talked about in the Bible thousands of years ago."
(H. K. - MA)

"This documentary is certainly worth watching. I was pleased that they brought up the soft tissue found in a couple of different dinosaurs and what a problem that is for the evolutionary theory agenda. My only complaint is that the director has a preschool type book reading in a library setting going on through out the video. They are just short segments but they just don't seem to fit in. The overall material is certainly not geared to that age so it does seem kind of an out of place inclusion."
(K. R. - CA)

"I was blown away by this DVD! As a Christian, the discussion of Dinosaurs was always a gray area, and basically left alone. It's really helped me understand where to place these ancient beasts in terms of God's creation. I would recommend it to everyone. Give it a try, what do you have to lose?"
(X. D. - NM)

"The video was well done. It laid out the argument clearly and presented many examples of evidence when viewed from a paradigm different than the one crammed down everyone's throats to support their position. The video with the children's story interspersed throughout made the kids interested in watching it all the way through. While the scientists were talking even though my kids were waiting for the next bit of the story I know they likely absorbed some of the more adult material. It was not only educational to watch it was also fun and neat."
(D. T. - WA)

"Having watched the documentary, I thought it was very thought provoking. The thesis behind the DVD was how could so many cultures have stories and legends containing dragons that were described the exact same. Most of these descriptions resemble those of dinosaurs according to the experts. The DVD is actually broken up into two parts. The first part describes dragon stories, dragon art, and the use of dragons in culture in general like in China. They also discuss oral legends told by Maori people and Polynesians describing these dragons. They mention how historians like Herodotus, Josephus, and Marco Polo mentioned things like "giant lizards" in their writings. The conclusion drawn was that these dragons lived with man, and that they were dinosaurs. The second part of the documentary was much more scientific in nature. It is from a young earth point of view. The experts on the DVD wanted to explain how fossilization occurs, how it was possible that dinosaurs aren't as old as people think. For example, they point to evidence that dinosaurs and mammoths lived around the same time. Man and mammoths lived around the same time, thus, man lived with dinosaurs (A=B, B=C, so A=C). Their most compelling argument was the discovery of a T-Rex bone that still had soft tissue and marrow, which if the dinosaur died out millions of years ago, then that could not have happened. Overall, I found it thought provoking and interesting. All of the people giving commentary had "Dr." in front of their name. They had paleontologists, marine biologists, physical chemists, and botanists. All of the experts came from Creation Ministries International which is in Australia, I believe. All of these scientists have a young earth creationist perspective, and for a lay person like myself, they made a compelling case against the conventional wisdom. Watch it with an open mind."
(E. B. - VA)

Does God Exist? a Debate (Hitchens vs. Craig) 2-DVD Set