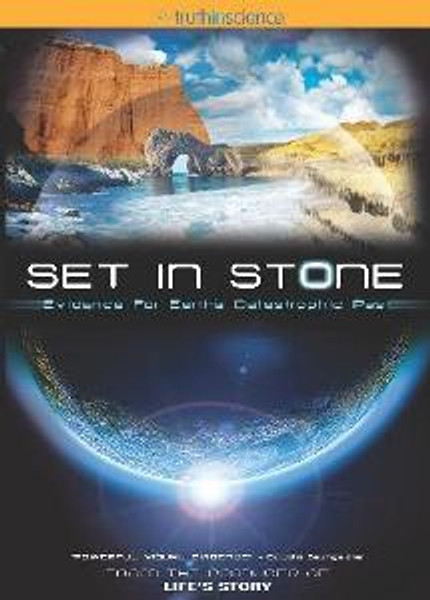 Set in Stone takes the viewer on a visual odyssey of discovery. Shot in high definition on location around Britain, this DVD transports the viewer to the spectacular scenery, awe inspiring landscapes and beautiful coastlines of England. Set in Stone presents evidence for Earth's catastrophic past to enable the viewer to ask important questions.

According to modern geology, our world is over four and a half billion years old, and its geological features have been sculpted over vast eons of time. Everyone knows that Planet Earth is unimaginably ancient. It's common knowledge that geological forces have acted slowly over millions of years to form the rocks beneath our feet. But what if what everyone 'knows' is wrong?

Most significantly, Set in Stone pays a visit to Siccar Point in Scotland, made famous by the pioneering naturalist James Hutton, whose observations have sparked an earthquake in the science of geology that still reverberates to this day. Along the way, we will pose some intriguing questions:

- Were the rocks around us formed slowly and gradually - or suddenly during catastrophic events?

- Did the history of the world unfold over vast eras of time or much shorter periods?

- And what do the rocks really tell us about the geological history of our world?

"It seems that the evolutionists are convinced that they have found the last word on life, some of us however, doubt that they have the full answer, and so are still searching." - Dr. Milton Wainwright, Dept. of Molecular Biology and Biotechnology, University of Sheffield

This DVD comes with a fully referenced transcript with over 150 citations from the scientific literature. The DVD Chapters are as follows:

Andrew Snelling - earned his PhD in geology at the University of Sydney for his work on the Koongara uranium deposit of Australia's Northern Territory. Dr. Snelling worked for many years as a field, mine and research geologist in the exploration and mining industries.

John Whitmore - gained his PhD at Loma Linda University for his work on the taphonomy of fossil fishes in the Green River Formation of Wyoming. Dr. Whitmore currently serves as professor of geology at Cedarville University in Ohio.

Paul Garner - has a BSc in Environmental Sciences and is a Fellow of Geological Society of London. He is currently part of an international research team investigating the origin of the Coconino Sandstone of central and northern Arizona.

Set in Stone has been produced to the very highest standards from the producer of Life's Story 1 and 2.

Download the free PDF fully referenced transcript with over 150 citations from the scientific literature at www.TruthInScience.org.uk.

25 Where Does the Evidence Lead? Ministry Give-Away DVDs

50 Where Does the Evidence Lead? Ministry Give-Away DVDs