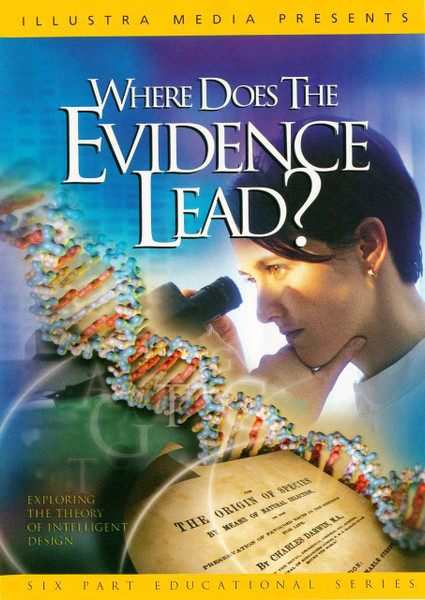 NEW! From the producers of Unlocking the Mystery of Life, comes a six-part educational series that explores the theory of Intelligent Design.

Where Does the Evidence Lead? is a re-cap, summarization of the same materials included in Unlocking the Mystery of Life. It's an incredibly easy-to-view and easy-to-understand DVD/Video!

Where Does the Evidence Lead? contains all of the same footage utilized in Unlocking the Mystery of Life but the program material is divided into six 10-minute chapters that allow the viewer to quickly view and easily grasp the compelling case for Design vs Darwinism.

Part 1
LIFE: THE BIG QUESTIONS
A new challenge to the theory of natural selection.

Part 2
WHAT DARWIN DIDN'T KNOW
Exploring the complexity of the living cell.

Part 4
HOW DID LIFE BEGIN?
Why “chance” cannot explain the origin of life.

Part 5
THE LANGUAGE OF LIFE
DNA genetic information, and life on Earth.

Part 6
THE DESIGN INFERENCE
The scientific evidence for intelligent design.

This is a must-have for all home-schoolers or for anyone who wants to learn more about the argument for a created universe.

"Darwin's own words and an Evolutionary Micro Biologist's will tell it all. Presented with the intellectually honest in mind. This may even change your mind as much as it did those featured in this DVD. Gives someone a whole lot to think about when it comes to what you think started everyone's existence. I thought I'd heard the best evidence on Creation vs. Evolution until watching this DVD!"
(D. M. - FL)

"What a wonderful video! I used it in my science class to encourage a discussion among the students. This is something everyone should watch!"
(D. F. - IL)

"Okay, I get it! After viewing this DVD, I realized how narrow and unfounded my belief in Darwin's Theory of Evolution really is. It really made me think about all the stuff that was taught as truth in school. I just bought into what ever the teacher was saying and I really never thought there was any rational alternative to Evolution… I was wrong!"
(K. B. - IN)