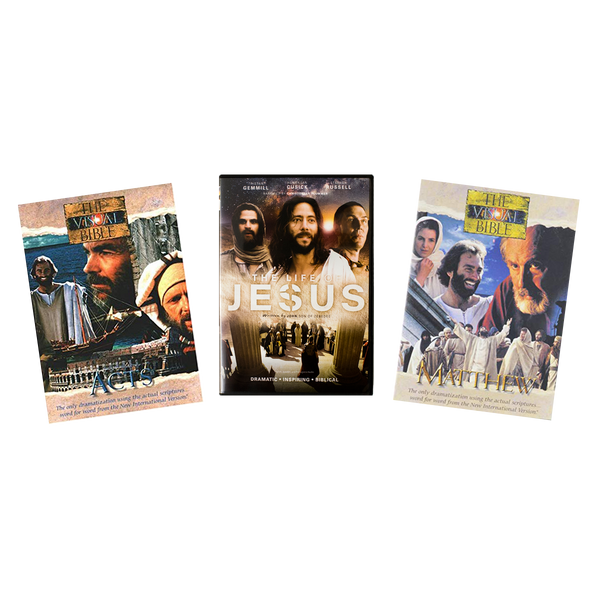 The Holy Bible Vividly Comes to Life!
The Books of Acts, Matthew, and John!
Adapted for the Screen, Word-for-Word from the Scriptures!
Filmed on Location in Tunisia, Morocco and South Africa!
Starring: Dean Jones, Richard Kiley, Jennifer O'Neill, James Brolin and Christopher Plummer!

In The Visual Bible: Acts, you will journey with the physician Luke ( Dean Jones ) as he tells the enthralling story of the danger, struggles, and triumph that marks the birth of the Christian church. Share the times of mystery and wonder that follow the resurrection of Jesus. Walk with the risen Lord. Watch as He is taken up into heaven. Experience the transforming power of Pentecost and catch the fire as God uses the passion of Peter ( James Brolin ) and John ( Andre' Jacobs ) to send the flame of faith racing throughout Jerusalem and around the world. Luke's powerful narrative brings to vivid life the compassionate love that unites believers across the ages. (English Only)

Experience The Visual Bible's Matthew ! This powerful and entertaining film is taken word-for-word from the text of the New International Version translation of the Bible. It's a multimillion dollar production that appeals to all ages, and offers outstanding educational, spiritual and entertainment value. Filmed on location, The Visual Bible: Matthew features a cast of thousands, historically accurate costuming and award-winning directing. The film stars the Emmy award winning actor Richard Kiley as Matthew, and introduces Bruce Marchiano as Jesus. (English & Spanish)

The best-loved of the four Gospels, The Visual Bible: The Gospel of John is now re-titled The Life of Jesus According to John , vividly comes to life in a faithful and powerful dramatization of the Biblical text. The Life of Jesus meticulously re-recreates the era of Jesus during a tumultuous period that changed the course of history. Starring Henry Ian Cusick as Jesus, and narrated by Christopher Plummer , and with a cast of over 2500, The Gospel of John has been adapted for the screen, word for word, based on the American Bible Society's Good News Bible, by Emmy-nominated John Goldsmith and is directed by acclaimed British director, Philip Saville.

Unlocking the Mystery of Life VOD

Where Does the Evidence Lead? VHS