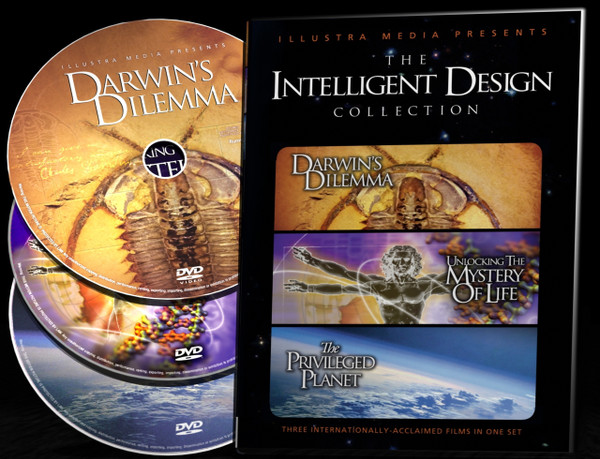 In 1999, Illustra Media began a project that would span more than nine years, four continents, and thousands of hours of research, writing, editing, computer animation, and location photography. The objective was to create a documentary trilogy that would present the scientific case for intelligent design. Unlocking the Mystery of Life (released in 2002) revealed compelling evidence for design at the level of molecules and cells. The Privileged Planet (2004) explored the depths of the cosmos in a memorable search for purpose in the universe. These critically-acclaimed documentaries were broadcast on PBS and translated into more than 20 languages. They have inspired and educated millions and fueled an international debate on the origin of life.

Darwin's Dilemma: The Mystery of the Cambrian Fossil Record. This feature-length documentary examines the Cambrian explosion of life, one of the most remarkable events in the history of our planet. During the Cambrian period complex animals first appeared on earth fully formed in a geological instant - without evidence of any evolutionary ancestors. Audience response to advance screenings of this third DVD in the intelligent design trilogy has been outstanding.

"Darwin's Dilemma" completes the trilogy of powerful documentaries establishing the superiority of intelligent design over Darwinism. It is the capstoneâ€¦and it pulls together arguments from the other films, adds new ones, and climaxes with a resounding victory for design. Any fair-minded referee would call, "game-over."
(D. C. - Los Angeles)

Charles Darwin viewed this event as an inexplicable mystery. He had envisioned the evolution of life through a multitude of small, undirected steps. Yet, the fossil record reveals no such pattern of gradual development. Instead, early in the Cambrian period compound eyes, articulated limbs, sophisticated sensory organs and skeletons burst into existence seemingly out of nowhere.

"...this film is outstanding. I'm not a scientist, but the evidence and arguments were presented so clearly and convincingly, there's no way that Darwinian evolution can stand up to them. Where is the missing evidence Darwin's theory requires? It's just not there."
(J. C. - North Carolina)

Filmed in the United Kingdom, China, South America and the Canadian Rockies, Darwin's Dilemma explores some of the most important fossil discoveries ever made and with them, a mystery deeper than Darwin ever imagined. For, the Cambrian explosion was actually an explosion of biological information - assembly instructions in DNA and embryonic blueprints that directed the development of the first complex animals. Information that could only be the product of foresight, purpose and intelligent design.

"...a magnificent program. Just superb. The animation and logic are incredible. We'll definitely be purchasing copies and showing them to students and faculty this fall, as well as at local churches and libraries."
(A. B. - Santa Barbara, CA)

The Privileged Planet is an hour-long documentary that explores the scientific evidence for intelligent design and purpose in the universe. In the process, Earth is revealed as far more than the product of time, chance, and random natural processes.

Unlocking the Mystery of Life is the story of top-notch, contemporary scientists who are advancing a powerful idea -- "the theory of intelligent design." Using state-of-the-art computer animation, this film transports you into the interior of the living cell to explore systems and machines that bear the unmistakable hallmarks of design. Discover the intricacy of a microscopic bacterial rotary motor, which spins at 100,000 rpm

"Unlocking the Mystery of Life is great in every way: 1. It makes a compelling case for intelligent design. The "outboard motor" design in the bacterial cell itself makes the point; the DNA replication is absolutely awe-inspiring. The argument of recognizable patterns (with low probability of such patterns occurring by chance) is simple but forceful and consistent with human logic. 2. The production and computer animation are top-notch. 3. It is understandable to the average person, yet challenging to the intellectual."
(E. V. - IN)

Metamorphosis: The Beauty and Design of Butterflies VOD

Living Waters: Intelligent Design in the Oceans of the Earth VOD